Pepsi, a beverage leader with over $22 billion in annual sales globally, is also a major force in today’s music and pop culture scene. To reinforce its positioning as a maker of NOW moments and extend its “Live For Now” campaign, the brand wanted to leverage its sponsorships of the Super Bowl and GRAMMY Awards by infusing the events with more consumer participation.

Working with Pepsi’s digital agencies, WP created a series of promotions driving viewers to Pepsi Pulse, a social media-activated interactive dashboard at pepsi.com. Fans were invited to submit photos showing their love of the game for a chance to be seen in a first-ever, crowd-sourced Halftime video featuring Beyoncé. They could also tweet about it and enter a contest to win a trip to the Super Bowl.

Next, to deliver a richer GRAMMY experience and elevate Pepsi’s “Best New Artist” category, WP and the agency created promotions inviting fans to watch a behind-the-scenes video of nominees preparing for music’s biggest night – and tweet about their favorites on pepsi.com. The strategy not only hit the right notes with viewers on and off air, it amplified awareness of Pepsi as a social platform for sharing what’s NOW and trending in music and pop culture. 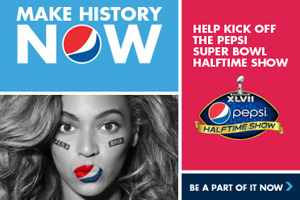