Lady Liberty, one of the world’s most recognizable women, is a universal icon of freedom and democracy. Dedicated in New York harbor in 1886, her milestone birthdays are among the most extraordinary events in history – and who better to cover them than New York’s oldest daily newspaper, the New York Post.

To promote the paper’s vital role in this historic event and daily coverage of all celebrations leading up to it, WP and the Post‘s ad agency launched a comprehensive Tribute to Liberty campaign. Complete with TV, radio, print ads and an advertiser kit, creative tactics included a reprint of the newspaper’s first edition and a commemorative poster featuring rare postcards depicting over a century of history. Some card backs displayed handwritten messages, stamps and postmarks providing touching insights into what Liberty and Ellis Island meant to new immigrants.

Tribute to Liberty was so successful, the New York Post and other publications such as the Boston Herald continued to reprint and distribute the first newspaper and vintage poster long after the event ended. 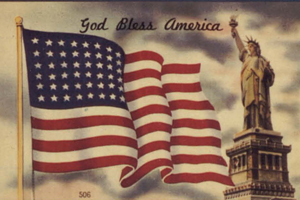